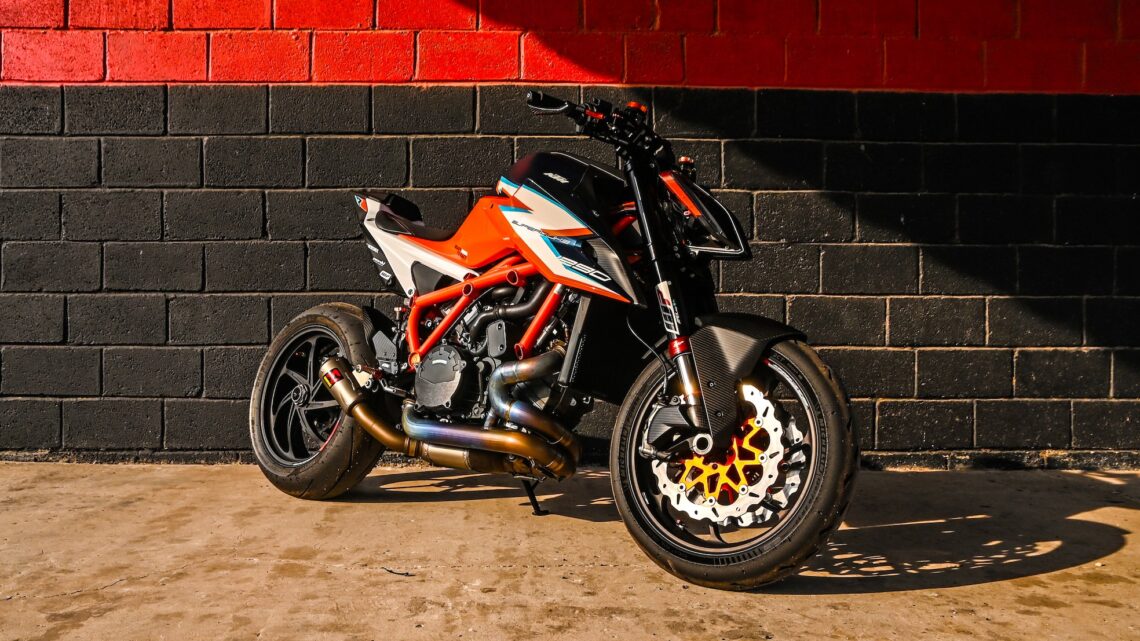 KTM’s all-mighty 1290 SuperDuke R needs no introduction. It’s brutally good in every way and excites more than most – that’s why most can’t get enough of it – including ourselves.

But, KTM is not one’s to just sit back and enjoy its success. They are always looking for more, so, they gave their hyper-naked machine an extra R making it more ‘Ready to race’ than ever.

They say in life it’s not what you know, but who you know, and this came into play once again with this exclusive SA test as I am lucky enough to know a guy who recently got himself 1 of only 7 new KTM machines to arrive in the country and lucky for me, and you all, he let me test his gorgeous new naked orange beast.

Now, you might be thinking that this is just an ordinary KTM 1290 SuperDuke R and in many ways, you would be forgiven for thinking that as it does look just like that. But, it isn’t. This one has an extra R on it, and when motorcycles get an extra R that means not only will you pay extra Rands, but you get more Radical, more Refined, more… RACEY!

That’s exactly what the new KTM 1290 SuperDuke RR is all about – giving the customer more! Over the years, any KTM model that had an R at the end of it meant pure radical and more radness. So, you can imagine what happens when they put two Rs at the end?!

KTM prides itself on its racing achievements, hence why its slogan is ‘Ready to Race’ and one can feel the track-inspired goodness in most of its models, but this RR takes the cake and is more ‘Ready to Race’ than ever.

What does the extra R mean?

I’ve said many times – I love SuperDuke! It’s just so much fun to ride an orange naked beast (ok, that sounds a bit weird). It’s raw, edgy, thrilling ride gets the heart racing and face smiling every time. The only downside to it is that when buying a new 1290 SD R one does not get the complete package. Customers have to fork out more rands to unlock the full potential of the bike by purchasing the track pack, which unlocks the beast within.

So, the RR version is basically all that 1290 SD R goodness made better and with full potential and more unlocked. It’s lighter, faster, and more blinged-out compared to the R model. When I say faster, it still makes the same power figures from the same LC8 twin-engine both models share, but the lighter weight, full electronics pack, and updated suspension makes it faster lap times wise out on track.

To be honest I’m glad they did not throw any more power at it as it’s more than fast enough with the 180hp and 140Nm available. This thing is stupid fast and the grunt from low down is astounding.

KTM has improved its naked beast over the years adding more refinement and maturity mostly in the suspension and electronics department, while also keeping that raw edge that KTM customers are accustomed to and love.

KTM have turned it up to 11 with their state-of-the-art new 1290 SuperDuke RR, taking the already formidable stock machine and stripping out every gram of fat while tuning the electronics to the max.

The first thing you’ll notice is that almost everything that can be carbon fibre is carbon fibre. The fairing, the chain guard, the mudguard, the brake ducts, the undertray – even the ignition lock. The fancy plastic self-supporting seat unit of the standard R has been replaced with a carbon single seat unit that weighs just 800g. There are new machined triple clamps that save 320g, new forged wheels that save 1.5kg and a new battery that drops another 2.5kg. The result is a bike that looks more like a concept bike than a production bike and weighs 9kg less than the standard model. KTM say they could have gone further with the wheels but their tame ex-MotoGP racer, Jeremy McWilliams, advised against it as they wouldn’t have been stiff enough to get the most from the chassis performance.

Away from the weight trimming, KTM has boosted the levels of kit on offer. The standard WP suspension has been replaced with their Apex Pro level components. Up front, the RR features Apex Pro 7548 closed cartridge forks while at the rear there’s an Apex Pro 7746 shock that can be adjusted in length for sharper turn-in. There’s also an adjustable Apex Pro 7117 steering damper.

No wannabe track racer is complete without sticky rubber, so KTM has shod the RR with Michelin Power Cup 2 tyres.

The accessorizing doesn’t stop there either. As well as all the carbon fibre, the RR comes with adjustable controls throughout, a titanium Akrapovic slip-on, and a quick-action throttle. There have been changes to the electronics, too, including a reduction in traction control intervention in all modes. Sport mode has been replaced with ‘Performance’, which lets you fiddle with TC, and throttle settings, start launch control as well as disabling anti-wheelie.

KTM made just 500 of them globally and even with an R405,999 price tag, they’re sold out fast, making this test very exclusive and making me one lucky journo to be able to test it.

Graeme Stretton is the proud owner of this new machine he bought the bike from RAD KTM in Sandton and the first thing he did once the run-in service was done was enter it into the streetbike class at round 4 of the WOM Racing Series down in PE.

In only his second race ever, and the RR’s first race meeting, Graeme and his RR battled for the win in the Streetbike class just missing out on top spot, taking a well-earned 2nd overall proving just how good this machine is.

Graeme entering the WOM Series provided the perfect testing ground for me to test the new RR. There was an open trackday session on Thursday before so I jumped at the opportunity to test the RR at a track I love and have raced at before on a 1290 SuperDuke R.

A few years back I did the exercise of taking a 1290 SD R and entering it into the BOTTS class to see how it compared to full-blown race bikes of the Italian kind. It passed with flying colours as I managed a 2nd place in heat 1 setting very competitive lap times in the process. Race 2 did not go as well, but it was more my fault than the bikes. I got out front and pulled a healthy 2-second lead after only 1 lap, but then, whilst trying to do my best Brad Binder impression carrying massive speed and lean angle into the fast right-hand sweep, threw the bike into the PE scenery. A low point of the exercise no doubt but we did prove that the 1290 SD R was indeed ‘Ready to race’ and competitively at that. We then also went on to finish the then 24 Hour race at RSR in 2nd place on the same machine. That raised many an eyebrow and since then I have seen plenty more SDs out at track days and race meetings.

The only problem with that whole exercise was the fact we had to do a lot of suspension work to get a decent setup. Pulling forks through, adjusting pre-load, and lots more to try to get the best out of the then none high spec suspension on the then Gen 2 model.

Luckily the new Gen 3 beast comes with a much better suspension – the WP Apex – which was the most welcomed change on the new spec bike. The RR version takes it to the next level with the more racy Apex Pro suspension front and back. This, and the 9kilo overall weight saving is what made the RR feel much better out on track compared to the current R model, which is already a leap ahead of the Gen 1 and Gen 2 models.

The RR version takes the SuperDuke experience to a new level in every department. It handles shaper and is more direct than ever. It’s more assured, especially on the front where naked bikes tend to feel a bit twitchy out on track. When I tested the new R model for the first time I could feel a massive improvement in the handling department out on track thanks to the new WP Apex suspension and RC8 R superbike chassis, but the RR’s Apex Pro suspension and setup done by former MotoGP rider Jeremy McWilliams takes it even further.

When buying the RR you get a full manual with various suspension settings from McWilliams himself. There is a street, sport, and racecourse setting available, so the rider can use the special tool that comes with the bike and conveniently make changes.

We had it set on racecourse and it was perfect. No need to change a thing. The RR’s setup was perfect with the stiffer settings for track and combined with the very sticky Michelin Power Cup 2 track tyres was eating up the gorgeous PE track. Touching on the Michelin rubber and I was very impressed. I always think bikes like this need the best in the business Pirelli rubber fitted, but these Michelin’s felt great and offered proper good grip and stability on corner entry, mid-corner, and exit. No complaints whatsoever and lasted a lot longer than the Pirelli’s that most were using on the weekend.

Braking from the top-spec Brembo Stylema’s was awesome – great feel, no hesitation or fade. The stiffer and higher specced suspension also helped and gave the bike a much more solid feel overall, so no diving too much hitting the bottom getting the bike all out of shape. Planted and assured all the way around.

The electronics were also much better. No interference at all, just working perfectly in the background offering me all the assistance I needed to go fast. Wheelie and traction control was set at 1 just to help me control the very powerful and responsive 140Nm of torque available and boosted 180hp thanks to the 17% extra being at sea level.

Overall the bike felt great and the extra R could be felt in all departments. It did everything better and felt a lot more assured out on track, which is pretty much why the bike was created. There’s no pillion seat, plenty of carbon fiber, pro suspension, and full track electronics making it a proper track weapon. I just wish KTM had maybe thrown a full fairing on it, making it a proper RR superbike model because it sure felt like one… but let’s wait and see if a Super, Duper 1290 SuperDuke RR-R will make an appearance sometime soon… Oh please KTM, make it happen!!!!

Copyright © MOTO RIDER WORLD 2022
All rights reserved. No part of this publication may be reproduced, distributed, or transmitted in any form or by any means without the prior written permission of the publisher.