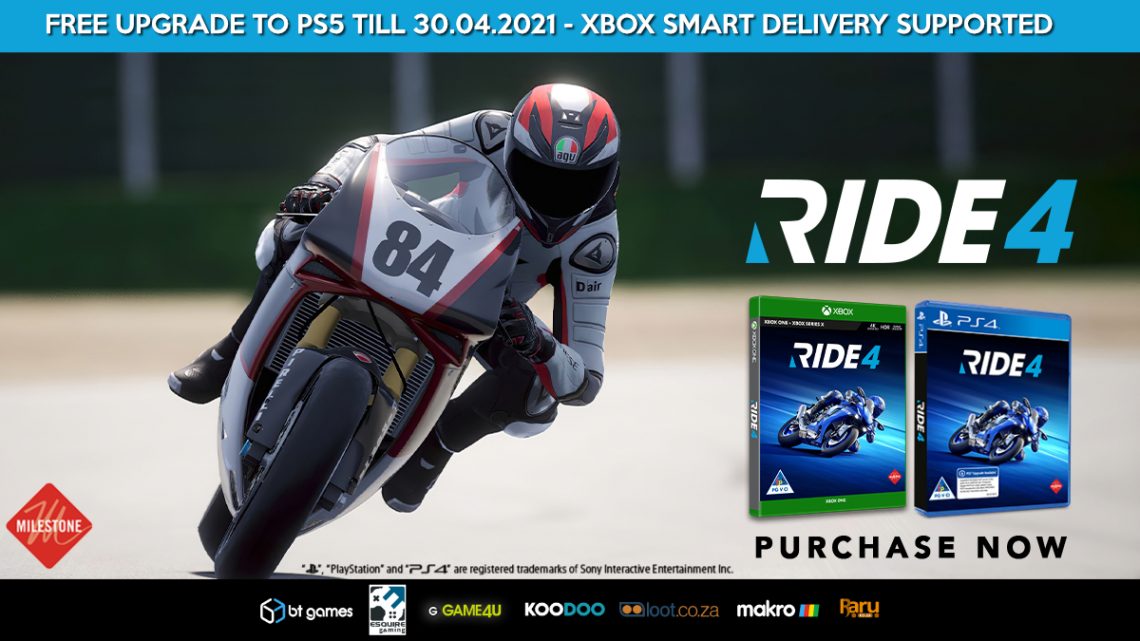 On the 8th of October Milestone games released what was perhaps one of the most anticipated Motorsports games of the year for motorcycle game enthusiasts. Ride 4, As the name suggests is the 4th edition in milestones ‘Ride’ series and let me tell you, it’s better than ever. That being said, it’s not perfect. When you start up the game for the first time you are immediately put into a time trial mode on a stock R6 where you have to beat a minimum time in order to access the rest of the game.  For someone who has experience with bike racing games, this shouldn’t be too much of a hassle but for beginners, it will take a lot of time to get used to.

There are a number of different types of activates available in the game such as normal races, time trials, overtake challenges, gate challenges and endurance races all of which form part of the rather extensive career mode. In terms of other modes other than career mode though, there isn’t much. Ride 4 allows you to create your own character with the ability to choose a number, riding style, number of fingers used for braking etc. the game also has a rather in-depth editor where players can create custom liveries for bikes, suits and helmets as well as the option to create a custom Butt patch and stickers that can be shared among players online. As you can see from the photos, I have used this to create the Moto Rider World Logo. Another part of the editor is the fact that Milestone has managed to get the licensing for a number of motorcycle and accessory brands which allows you to use these logos in your creation process.

Now for the important stuff, the bikes. The bikes are supremely modelled due to the fact that milestone rescanned every model to make them as realistic as possible and it paid off. The bikes are amazingly detailed with every nit and bolt perfectly replicated in the game. Currently, there are about 180 different bikes to choose from, from all the big brands. Regardless of what you’re into, if its hyperbikes, superbikes, naked bikes, race bikes, classic bikes, Harleys and even Supermotards, there is something for you. To make this even better milestone will be adding a number of new bikes over the course of the next year in the form of DLC (Downloadable content) some of which will be free and some of which you will have to pay for depending on whether you have the season pass or not. The same goes for the tracks. There are a number of different racetracks in the game from famous GP courses like Mugello and Philip Island to Irish road racing courses. As with the bikes, there are more tracks incoming including South Africa’s very own Kyalami Grand Prix circuit. Which should be released in a free DLC shortly.

Back to gameplay. The gameplay and physics for Ride 4 are, in my opinion, the best in the series so far but beginners beware. If you have been playing bike games for a while you will have instant fun, but Ride 4 can difficult and will take some time to get used to. The mechanics of the game are brilliant with the rider and bike moving around the track in a very believable fashion. If you are not patient though Ride 4 could be the end of your TV. For example, the time trial event in career mode demands nothing less than perfection, cross a white line or a blade of grass and you fail the event, being forced to start from the beginning. When this starts happening over and over again its enough to drive anyone to madness. Get the time trials right and overcome the frustration, however, and Ride 4 is tons of fun.

Lastly, we have the multiplayer mode. This, much like MotoGP20, allows players from around the world to play and compete against one another to see who truly is the fastest of the fastest. In fact, Moto Rider World has an online racing league that will be starting soon so if you are interested in testing yourself, send a message to the Moto Rider World Racing League South Africa on Facebook and get involved!

Overall Ride 4 is a really great game once you get accustomed to the physics and it really does give you the idea of riding your dream bikes around some of the best racetracks in the world. If you are into bike racing games, then this is a must-have.

Depending on the edition you want as well as the place you purchase it, a copy of Ride 4 will set you back between R750 and R1495 but in opinion regardless of the copy you decide to get, it will be worth the money.

Copyright © MOTO RIDER WORLD 2021
All rights reserved. No part of this publication may be reproduced, distributed, or transmitted in any form or by any means without the prior written permission of the publisher.